You are here: Home / Retirement / 5 Life Decisions That Secure Your Retirement 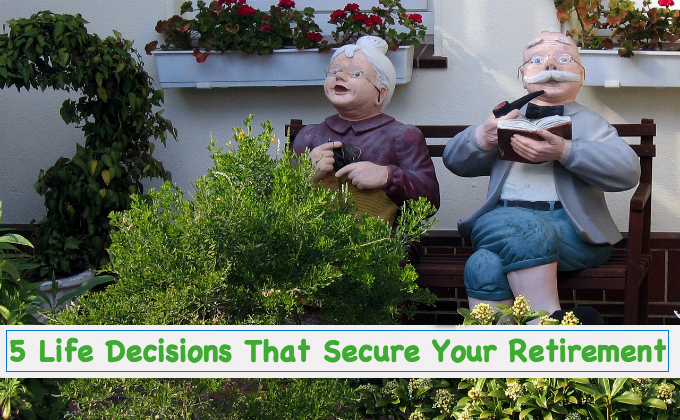 Perhaps John Lennon said it best when he was quoted as saying, “Life is what happens to you when you’re busy making other plans.” For better or worse, it’s true, especially when you fail to heed the signs life puts up on the way from birth to death. This includes all of the advice and warning signs that regard retirement.

Simply put the more of these life decisions that you encounter on the positive side, the better your chances that you can secure your retirement and ensure that it will be an enjoyable one.

It’s been said so many different ways, but it bears repeating. Taking nothing else into consideration, compounding interest can be one of the most important principles you can put to use to create a retirement of plenty. Compound interest is interest that is added to an already existing amount so that the added interest also earns interest from that point forward.

It should come as no surprise that Albert Einstein called compound interest the “Eighth Wonder of the World.” It can work miracles.

Most people would agree that in many cases, the amount they decide to save for retirement when they begin their career is almost always arbitrary. Unfortunately, determining the amount of money you will have at the beginning of your career is like a job at the beginning thinking it will make you happy, and staying with it despite learning that you can’t stand doing the work.

What’s the harm in changing careers in favor of something you like? Likewise with your savings plan. If it helps you to choose an arbitrary savings figure at the start of your career, that’s fine, but later on, once you have more discretion over what you spend money on, why not increase the amount of your savings?

Everyone has heard the disappointing news that someone has lost nearly everything they had in a divorce. Unfortunately, not only does everyone involved suffer a significant loss of what they have, but a considerable amount is also lost due to lawyers fees and other expenses that are virtually impossible to recoup.

Making matters worse, in the years leading up to a divorce as well as those immediately after, making rational decisions about finances and practically anything else, is especially difficult. Everything else being the same, try to avoid getting a divorce as much as possible.

The longer you work the more money you will have coming in to sock away for retirement. It’s that easy. As great a temptation as it might be to take the early gold watch, working longer will give you more money to pad your retirement, invest, or use in any number of other ways.

Working longer will also mean that you can avoid one of the other biggest inhibitors of financial well being: debt. Debt is a millstone around your neck that is critical to avoid. Think of it this way: debt is no more than impatience expressed in money.

It’s true. Always be careful how you spend your money since you will never see it again once it is spent. Further, once money is spent you will not have it to enjoy your retirement with.

Another important factor to take into consideration before you retire is social security and how much you stand to gain if you retire early. The right decision to make in this regard is not always very easy, especially if you are married.

It will require that you take a long and serious look–not to mention a sharp pencil–to determine your situation and how it could provide higher benefits to you for the rest of your life. It’s also important to consider what the Social Security program will look like after the next few years, considering the

If you have the opportunity to take a lump sum, whether it is from an inheritance, downsizing, or some other source, take it. This is tricky since it depends on a lot of factors including the amount of the sum and others, but generally speaking, taking a lump sum will increase the number of years that you can add to your secure retirement. one bonus point.

It’s a natural tendency to want to move up in your housing status as you make more money. Unfortunately, to a great extent, it doesn’t make much sense. Instead, the house you buy to raise your kids in should be of a reasonable size to accomplish the mission.

As those kids fly the nest, it’s usually a good idea to either stay put and save on the additional money that you would pay for interest on a new loan, or downsize to a smaller home and take the lump sum you earn on your sale and put it away for your retirement.

It’s also entirely reasonable to want to take profit you make on your home to build a dreamed of addition such as a pool or some other improvement, but the transaction costs on the sale of a home is among the highest you will ever pay, so before you sell, consider carefully. There’s nothing wrong with enjoying your money, but there’s also nothing wrong with being careful with it either.

As you can easily surmise from the discussion above, retirement is not only a moving target, but it has a lot of parts that are constantly moving, and will continue to move until you die.

There is nobody and no tool that can predict the future for you, but with a little planning and a close watch, it’s easy to get a good handle on which direction you are headed. And once you do take that long look at your future and your retirement prospects, you should monitor it regularly, at least once every year, to make sure you are on track.

It’s at these points along the way that you will be able to make mid-course corrections to ensure that you will get to where you are going in good shape.