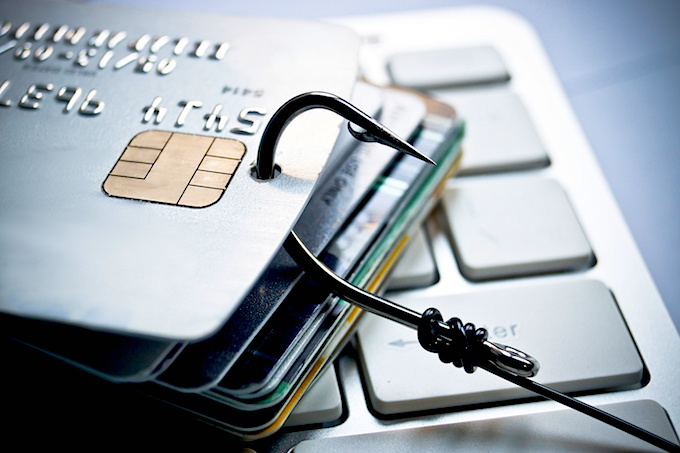 Nowadays credit card thieves is a common thing and everyone should be aware of this problem. Here we will tell the owners of the credit cards some of the most popular illegal methods to “facilitate” your personal accounts.

To begin with, once again we will remind each owner of the credit card that PIN should be stored safely, you should never give or show your number, and cherish the “plastic” as the apple of an eye.

Let’s talk about the most common methods of card fraud. As it turns out, even a simple cash withdrawal from an ATM can end in tears.

There are at least nine tricks with which speculators can suddenly leave you with a “plastic” in the pocket.

Fraudsters often use devices installed on the ATM, helping them to obtain information about the card. It can be special keyboard buttons, which apparently repeat the original buttons.

In this case, the cardholder withdraws money from the account without any problems, but the fake keyboard stores all keyboard keystrokes, naturally, including the pin.

Advice: carefully examine an unfamiliar ATM keypad before withdrawing money from the account.

Called Lebanese loops. The thieves use plastic envelopes, sized slightly larger card size that is laid in the ATM slot. The credit card owner is trying to withdraw money, but the ATM can not read data from the magnetic strip.

In addition, due to the design of this envelope, the ATM can not return the card. At this time, comes the attacker and sais that such situation happened to him just days ago.

In order to return the card, you only need to enter the PIN code and press Cancel twice. Cardholder tries, and, of course, nothing happens.

He decides that the card remains in the ATM, and goes to contact the bank.

The rascal quietly pulls out a credit card with an envelope with the help of simple improvised means. As he already knows the pin there only remains to withdraw money from the account.

Technically difficult, but it is possible to intercept data that ATM sends to the bank in order to check the availability of the requested amount of money in the account.

To do this, the fraudsters only need to connect to the appropriate cable and read the required data. We can say this option will increasingly occur in the nearest future.

In order to steal the pin code, some speculators leave the miniature video camera nearby. At this time, they are hiding in a car with a laptop, where they can see entered cardholder numbers.

Advice: when entering the PIN, cover the keypad with your free hand.

Expensive, but a sure way. There are cases when fraudsters pose their own “ATM” in a crowded place.

However, for some reason it does not work, and, of course, no money issues.

But successfully reads all the necessary data. And then it turns out that yesterday you have already removed all the money from the account!

At one time, the scammers from the UAE established in the openings for the credits special devices that stored all the data inserted into the ATM.

Attackers could only steal the pin by one of the above-described methods.

Fighting with which is impossible. We can only reconcile. Here is nothing depends on your care, caution or prudence.

It happens that bank employees collude with fraudsters. This happens very rarely, but no one is immune from such cases.

But not only cardholders suffer.

For example, large firms, shops, banks. And here the losses number in the hundreds of thousands of dollars and sometimes millions.

A classic example of phishing – you get an e-mail from the bank, go through the link and get to a completely different site that is very similar to the bank’s website.

Username and password are immediately transferred to the attackers, and the money flows into their pockets.

The substitution of the login page in the Internet bank may occur if your computer or smartphone is infected with viruses.

But today’s customers does not suffer from hackers create fake pages they suffer from those who are cunning entices data to access online banking.

For example, you can get SMS about card blocking. You call from the SMS and the receiver asks for proof of identity to enter a one-time password.

Another common situation: the buyer wants to send you a prepayment to your card.

You tell the card number and expiration date, after some time he calls back and asks to inform SMS code, by calling all sorts of reasons – money is gone the wrong way, he took instead of sending and wants to return.

Knowing only the number attackers can pick up the card number expiration date and make a purchase at some sites that do not require the CVV-code (eg, Amazon.com), also the backside code of the card is not required for small payments, such as mobile payment communication.

Experts from law enforcement agencies around the world believe that the crimes committed using plastic means of payment can be attributed to one of the most dangerous economic crimes.

Moreover, they are committed not only in the computer of the banking system but also through the Internet.

By some estimates, today there are about 30 kinds of illegal operations with cards via the World Wide Web.

The most common of them are non-existent cards payments, creating false virtual shops, electronic theft, false payments in gambling establishments.

There was even a special term – carding. It is an illegal bank card using to buy goods or services via the Internet.

Catching carding, you can either get the information of the real card, or generate all this data, but all systems would take it for the real fake.

Those who are interested are free to find links to sites that are openly traded in stolen credit cards.

The standard price for the card – from 40 cents to $5. Most sellers are in the former USSR, buyers, on the other hand, are concentrated in the Far East, the victims – mostly citizens of the United States and Europe.

According to the FBI statement, the Ukraine and Russia have already earned a reputation as countries in which the most skilled hackers live.

Hope now you will be more carefully and attentive when withdrawing your payments. But always remember that this method of “earning” money is illegal and you should never try them in the real life.